What I learned from Vandana Shiva, Part II: Eat as if Life depends on it, because it does

In part one we left off with Dr. Shiva saying that if we want to stop Trump (a.k.a. the accelerating destruction of the earth, rising inequality, and corporate co-opting of our democracy), we should start saving seeds and eating a biodiverse diet. I likely intuited your response: "Wait? So she's saying that if I want to bring down oppressive regimes and create an abundant economy grounded in care for the earth and care for people, I can do that by eating a diet of diverse foods? If it sounds too good to be true, it probably is....I wasn't born yesterday!" Am I right? Of course that's not all we have to do. After explaining to her audience one night that we must build the world we want with one hand and push back against injustice with the other, Dr. Shiva said, "That's why I love Hindu

Goddesses--they have so many arms! They can do so much!"

Still, I think the concept that biodiverse eating is remarkably powerful is worth fleshing out a bit. Barbara Kingsolver says, "Food is the rare moral arena where the most ethical choice is also the one most likely to make you groan with pleasure." Consider that over 90% of the varieties of seeds available in seed catalogs in 1900 have been lost. We are losing biodiverse farming at an alarming rate, and with it goes the seeds, wisdom, tools, and processes that make it possible. Closer to home, during the weekend with Vandana Shiva, I sat on a panel discussion about seeds with Brett Stevenson, a young barley farmer from Bellevue. She has taken an active interest in heritage grains, citing their nutritional benefits as well as their increased biodiversity and ability to thrive in less "ideal" growing conditions. Brett talked about the rise in gluten intolerance in folks, and how many times if people who have a hard time digesting wheat try breads or other goods made with ancient wheats like Emmer, Einkorn, or even just pre-WWII wheat varieties, often their bodies have no problem digesting the food. Dr. Shiva connected these dots further for us. When you have an industrial agriculture that needs uniformity to function (to harvest, to process, etc), what you get is a very genetically uniform strain of plant. When we eat this variety, our bodies, our digestive systems, are just getting hammered with molecule upon molecule upon molecule of the exact same thing, and they freak out.


Wheat has an enormous genome, containing five times the DNA than the human genome. Crazy, right? We all know that if you hook up with your cousin and have a baby, and then that baby hooks up with its cousin and has a baby, it doesn't take long before those kids are, well, to be PC, unfit to thrive. Purebred dog breeds experience all sorts of health problems because of their highly inbred genes. Plants are the same way. You can look at a huge field of very uniform modern wheat as the Poodle of agriculture--and just as dog lovers are increasingly turning to Labradoodles and Golden Doodles, farmers like Brett Stevenson are looking to more biodiverse strains of wheats. The ancient wheats might be more like the pound mutts in this analogy. Goofy looking, all over the map, but extremely resilient, healthy, and adaptable.

Imagine a field of wheat that looks like a brimming full dog park, with some Poodles perhaps, but also that crazy Basset Hound/German Sheppard cross that looks like a raked low-rider and that obsessive Border Collie mix that won't leave the ball alone. Some are wrestling, some laying in the shade, some biting at the sprinkler, some obsessively sniffing for God knows what on the ground. That's what a field of biodiverse wheat is like. So while our bodies are better off eating a more diverse diet, that diversity also creates resilience in the field. In a biodiverse field, some plants might sprout early and get nipped by a late frost but there will still be some later-sprouters in the field that will be fine.

Some plants might be too tall and get blown over by a big wind storm, but their shorter sisters will still thrive. Some may be more drought-tolerant than others, able to withstand a longer period without rain, and that could make all the difference. When a field is extremely uniform, it must have the exact conditions that variety needs to produce. While in good years the harvest and payoff is remarkable, in bad years, it can be abysmal. Usually a large amount of chemical fertilizers, pesticides, and water is used to attempt to guarantee the uniform field of plants will have exactly what it needs to produce. Some Native American pueblos have been farming in the southwestern United States for thousands of years using the biodiverse model, taking the opposite approach and saving seeds from "All their children", as Hopi farmer Leigh Kuwanwisiwma says in the film SEED: The Untold Story. So what does this have to do with us as eaters? As consumers, we have enormous power. If we incorporate more diverse foods into our diets, this demand will encourage farmers to plant more of them. At his famous Blue Hill at Stone Barns restaurant, chef Dan Barber offers a "Rotation Risotto" on his menu. He had been buying heritage wheat (Einkorn) from Klaas Martens, a skilled organic farmer, for the restaurant's bread. When he visited the farm, he realized that Klaas had to grow a large number of other crops just to grow the wheat. He had to rotate the wheat year after year with a nitrogen-fixing legume, a phosphorous accumulating buckwheat cover crop, a weed- and disease-suppressing ryegrass, etc. All so the wheat could grow well, with ample fertility and lower weed and pest populations. Barber realized he needed to learn to cook with all the crops in the rotation to support the healthy farming practices of the farmer economically, so he started making the risotto to do just that.

At Earthly Delights Farm, we're engaged in a grand collaborative project with Dave Krick, proprietor of Bittercreek/Red Feather restaurants. His new restaurant Diablo will feature a "masa menu" of several different types of corn masas for tortillas. We're trialing dozens of varieties to figure out which ones grow the best here, and then working with farms of varying scales to scale up through a gorgeous corn ladder. We can grow a handful of seeds into several pounds of them, and then pass them along to Peaceful Belly or another mid-sized farm, who can grow a few acres, which will produce enough seed for a larger-scale farmer to grow 200 acres, and voila! A new variety of corn finds its way into the diverse diet of Idahoans through the collaborative efforts of farmers, breeders, and chefs. So freaking exciting! And all we have to do as eaters is show up and eat delicious tortillas and this biodiverse agriculture can thrive

During the same inspiring weekend with Dr. Shiva I had the pleasure of getting to know another, closer-to-home hero: Thumbs Heath, who has made it his life's work to cultivate and care for hundreds of varieties of seeds in the vast majesty of the forests surrounding the Salmon River. He laughs about the myths that have been created around him: he lives totally off the grid, growing all his own food like an iconic hermit Mountain Man and Johnny Appleseed all in one. "What I'm trying to do is to learn how to grow what I eat and eat what I grow," he says simply. He still buys bags of oats from Azure standard, but he's also growing several dozen varieties of oats, learning their ins and outs both in the field and in his kitchen. There is real power in what we choose to eat. 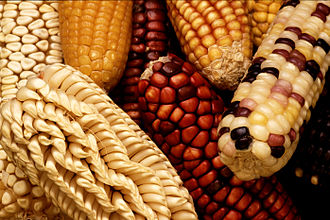 While it might not seem possible to do as Thumbs is doing and grow 27 different oat varieties alongside hundreds of others, we can all make an effort to seek out diversity in our food choices. If we continually choose Hamburger-French Fries-Coke, we create a uniform hamburger-fry-coke corn palace of monoculture on our farms and we contribute to the loss of biodiversity. If every time I cook beans, I simply buy a can of black beans, I am supporting black bean monoculture. But if I choose black beans sometimes, but other times Pintos, Tiger's Eyes, or Navy beans, I'm encouraging more biodiversity in the field by welcoming it into my kitchen. The final part of this series offers more concrete actions we can take to promote and preserve biodiverse agriculture. Dr. Shiva told me that we must first connect the seed with the seed. That is, we must learn to save seeds and create that beautifully abundant, regenerative system. But for it to really take hold, in a society, in a culture, in an economy, we must connect the seed to the food. We must do that Thumbs has dedicated his life to: we must learn to eat what we can grow (or what can grow in our bioregion). When the seeds become embedded in the food that forms the fabric of our cuisine, that's when we will have succeeded in creating a sustainable food system. In place of an industrial-chemical agriculture, we will have a biodiverse, life-sustaining model that creates greater health, for people and planet. I for one think that sounds delicious. Let's dig in!